By Geetanjali Kedia
about 1 year ago

Company does not have an identifiable promoter and US investment firm T Rowe Price is the largest shareholder, with 26% stake, while State Bank of India (SBI), Life Insurance Corporation (LIC), Bank of Baroda (BoB), Punjab National Bank (PNB) are sponsors, each holding 18.24% at present.

Objects of Issue and Shareholding:

Under SEBI Mutual Fund Regulations, an entity is not allowed to hold more than 10% in two or more AMCs. Hence, SBI, LIC and BoB are paring their 18.24% holding each by 8.25% to 10% each via the OFS, as they already own stakes in other domestic AMCs. T Rowe Price and PNB are also participating in the OFS, looking to pare 3% stake each. Post listing, T Rowe and PNB will be the two largest shareholders with 23% and 15% stake respectively.

While UTI AMC the 8th largest AMC, its market share has consistently been falling from 7.5% in March 2017 to 5.4% in June 2020, implying mutual fund quarterly average AUM growth of -0.7% when industry clocked 9.6% CAGR during March 2017-June 2020. Besides AUM mix has deteriorated as share of passive equity (i.e. exchange traded funds and index funds) tripled to 18% of AUM, from 6% three years ago (share of other categories remaining more-or-less constant), leading to de-growth of 2.7% CAGR in fee income, between FY17-20, from Rs. 854 crore in FY17 to Rs. 788 crore in FY20, as fees for passive equity fund is as low as 5-6 bps, vis-à-vis ~100 bps in active equity and hybrid, 25-30 bps in debt, 9-10 bps in liquid funds. Thus, ETFs which are growing for the company, earn lesser than liquid funds too. Financially, company has been facing double whammy, of one declining market share and adverse AUM mix, impacting revenue and profitability.

The 41 player domestic mutual fund industry, managing AUM of Rs. 24.6 lakh crore is concentrated in the hands of top 6 players, which, together account for 65% of AUM, their market share improving from 44% about 2 years ago. While industry AUM have grown at 14% CAGR between FY17-20, with most quarters witnessing growth, baring a few one-offs, many mid-sized and smaller AMCs face competitive pressure as large players continue to get larger. Thus, consolidation is only a matter of time in this 41 player industry.

At Rs. 554 per share, market cap of the company will be Rs. 7,024 crore, which leads to PE multiple of 26x and 29x, based on FY20 and FY21E earnings respectively. Below is the peer comparison with two listed AMCs: 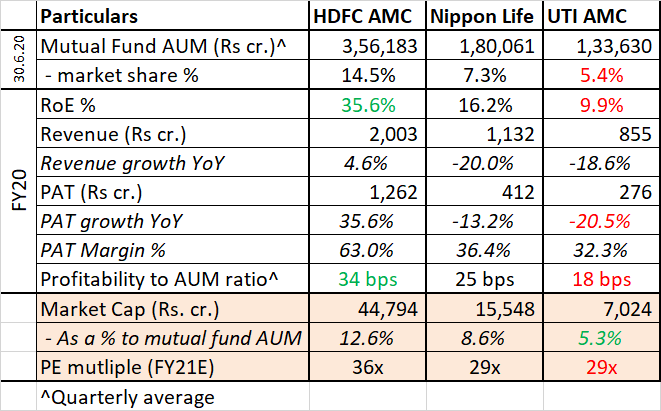 Asset management is a high Return on Equity (RoE) generating business. But UTI’s 10% is substantially below peers. In FY20, UTI’s PAT de-grew 20.5% YoY on revenue decline of 18.6%. As against this, HDFC AMC reported jump in both revenue and profitability, while Nippon Life reported a lower fall of 13% in PAT, on 20% fall in revenue. Thus, UTI AMC’s profitability is extremely vulnerable.

Another metric tracking profitability of AMC is Profit to AUM, which stands at only 18 bps for UTI, vis-à-vis 34 bps for HDFC AMC, which is India’s most profitable AMC. While UTI’s profitability is 50% lower than HDFC AMC, its FY21E PE multiple of 29x is just 20% lower than HDFC AMC’s PE of 36x, based on FY21E earnings. Benchmarking with Nippon Life too highlights that PE multiples for both UTI and Nippon Life are same at 29x, despite lower profitability of 18 bps for UTI, as against 25 bps for Nippon Life. While UTI’s market cap as a percentage of mutual fund AUM is only 5%, over 9% and 13% for peers, this valuation matrix does not factor in the AUM mix, which is lop-sided for UTI, as share of ETFs in mutual fund AUM is 18% as against industry share of 7%. Thus, UTI’s lower valuation multiples only reflect its weak financials as declining profitability appears to be a continuing trend.

Till the share of active equity in total MF AUM does not show an uptrend, profitability will continue to remain subdued and hence fundamentals less favourable vis-à-vis peers. Even if the company clocks AUM growth due to higher EPFO inflows and financialisation of savings in the country, its profitability is on a continuous downward spiral which will impact valuation sooner or later.

Please login to like the article.
Go to Login
Enter your email to get free stock market updates in your inbox !
* By clicking Register, you agree to our terms of use
You can also get updates via our mobile app.